As gamers, we all have those few memories we hold dear to us that helped define who we are. Those memories, that when sparked by a graphic or theme song, come rushing back to us in a flood of nostalgia. For me, one of those memories was sitting in the backseat of the car, tagging along to wherever with my parents, and then seeing the glow of the local Pizza Hut sign as we turned into the parking lot. Not only did I love the pizza, they also had a wide array of different arcade games my parents would begrudgingly hand over quarters for me to indulge in. Sure, my consoles at home may have had better graphics and didn't require a constant feed of quarters, but nothing beat those unforgiving, repetitiously challenging games. The kid I grew up next door to actually had a Galaga machine in his basement, and we would take breaks from pushing through Ocarina of Time and Final Fantasy VII to see who could grab the highest score. Those memories are unparalleled for me, and I will always long for those days again.

An unfortunate truth of getting older is that your time becomes more valuable. Unfortunately one of the first things to get cut from your repertoire is gaming. Sometimes you don't want to dive into a huge, epic game. Sometimes you want to pick up and play something that is just pure, arcade fun. Sometimes a game comes along that triggers the nostalgia flood and leaves you grinning from ear to ear. Assault Android Cactus is one of those games. 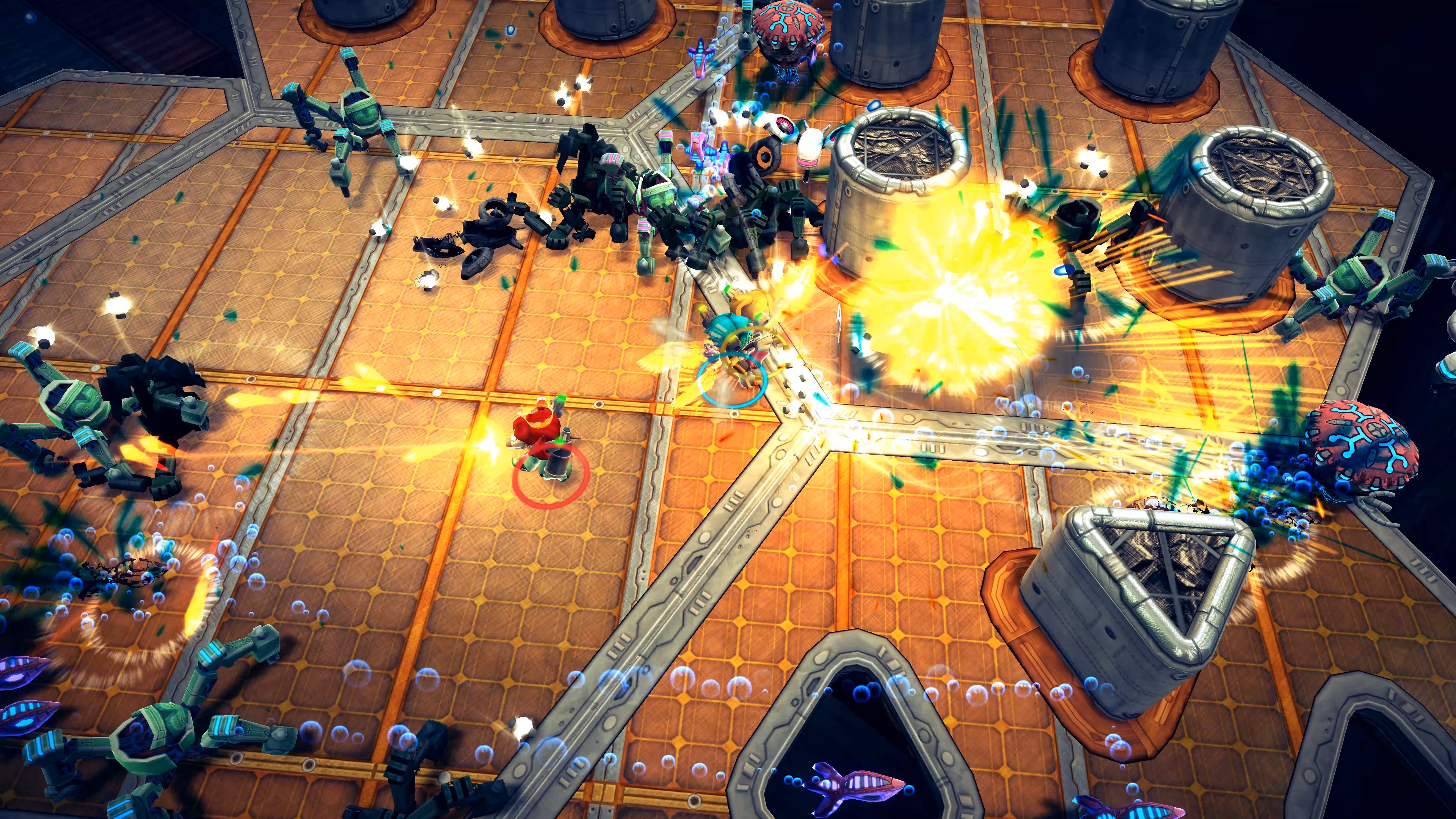 In true arcade game fashion, Assault Android Cactus is extremely easy to pick up. With that said, it also wastes no time getting you right into the action. As a twin-stick shooter, you'll grow comfortable with the controls almost immediately, and your focus will move direction to your on-screen character and their abilities. There are 9 android characters to choose from, each unique in their own way. As you play through the first hour or so, you'll find which play style suits you best. You'll also notice, however, that depending on the level design, enemy types, or the boss battle, certain characters will be stronger than others. Luckily, you're able to change your character at any time and try again from wherever you are if you happen to stumble. 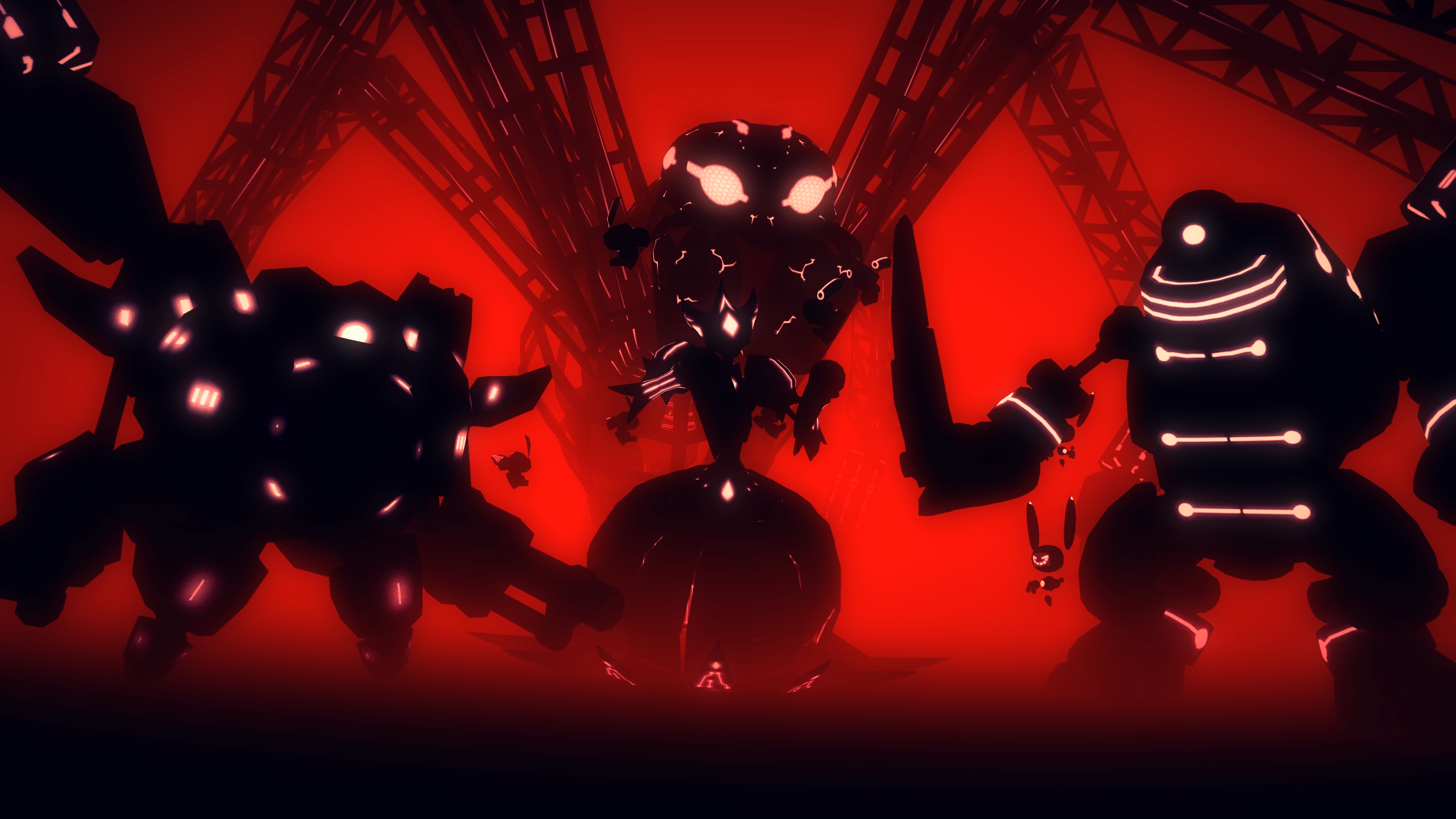 The boss fights are very well crafted and a well executed balance of frustrating and strategic. Each one being very geared toward the environment, you'll spend a few attempts getting your bearings before diving in for the victory. On a couple of the fights, I had to call up a few friends to drop by to couch co-op with me, as I needed some extra firepower. If you just can’t pull it off yourself, AAA supports 4 player multiplayer (offline only). This is an absolute blast, and is kind of like playing Goldeneye but with a Fuzion Frenzy type vibe. As much as I enjoyed this game playing alone, there is nothing better than playing with friends.

The level design does a good job of easing you in, but each one gets progressively more difficult, and introduces some new concepts. For example, one of the levels takes place on a flatbed train car that transforms slightly with each wave of enemies. Others take you to new heights with raising platforms, and others require you to side scroll your way through. Given that the core gameplay mechanic is the same (fight waves of enemies as you progress), it is extremely important that the levels make each new step a fresh and enjoyable experience. It's almost a miracle that they actually shipped this game; there is such an obvious passion behind this title that the team over at Witch Beam must have spent a considerable amount of time playtesting to deliver quality like this. 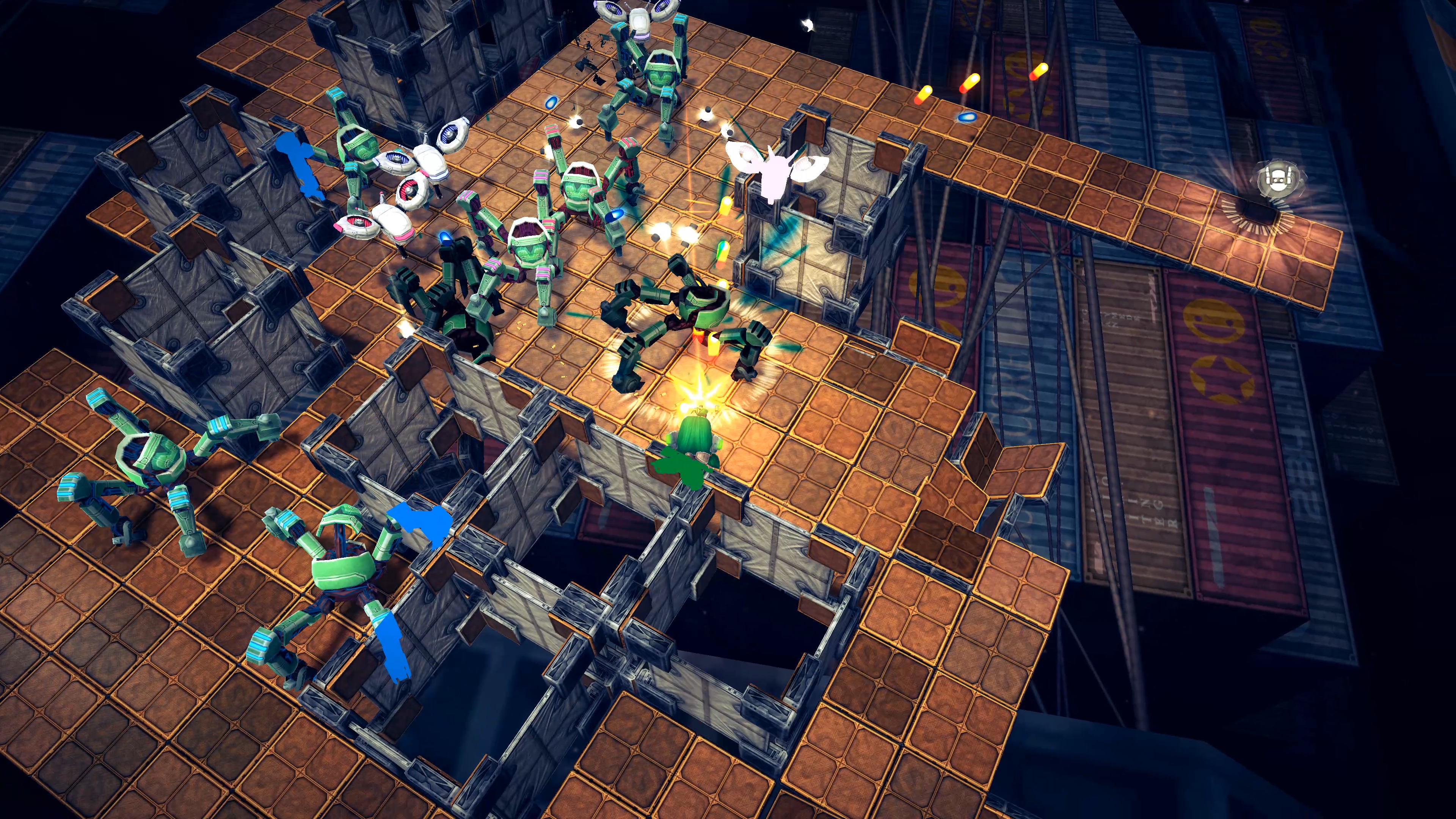 A welcome inclusion to the game modes is "Infinity Drive" which pits you against waves of enemies on a single level. It is your duty to last as long as you can. I'll admit, I was a little skeptical of the value in Assault Android Cactus at first, as the core story mode is roughly only 3 hours. Infinity Drive is the mode that evokes that arcade nostalgia for me. It reminds me a lot of those Galaga days and, more recently, a lot of Geometry Wars. Much like in Gears of War Horde mode or Call of Duty Zombies, you'll develop the itch to play "just one more hour" to see if you can make it past wave 27. I know it seems like an odd comparison, but the layered challenge is just so enticing. Assault Android Cactus also has an unlock-able item system to open up additional characters and levels (as well as Super Rare Achievements for those of you who are still chasing those). Personally, I lean heavily towards the role of "Completionist," so small gameplay inclusions like this speak directly to my play style. There are also daily challenges (referred to as the "Daily Drive") that give players a new objective each and every day. All in all, there is plenty of gameplay to be had. It's also a fun challenge to force yourself to replay through the story mode as different characters, or setting thresholds for yourself. Just like when you used to sit on the floor, 3 feet from the TV, and make up rules with your friends; nothing but bananas on Rainbow Road!

The original release for Assault Android Cactus was on PC back in 2015. I did play it back then, but the gameplay to me always felt more like a console game. Playing with a controller is just so much more natural than keyboard/mouse. My console of choice for multiple generations now has been the Xbox. Needless to say, I was pumped to read that not only was Assault Android Cactus coming to the Xbox One, but that it was also Xbox One X Enhanced. Launching on the same day as the Xbox One X, it was the first game I downloaded. 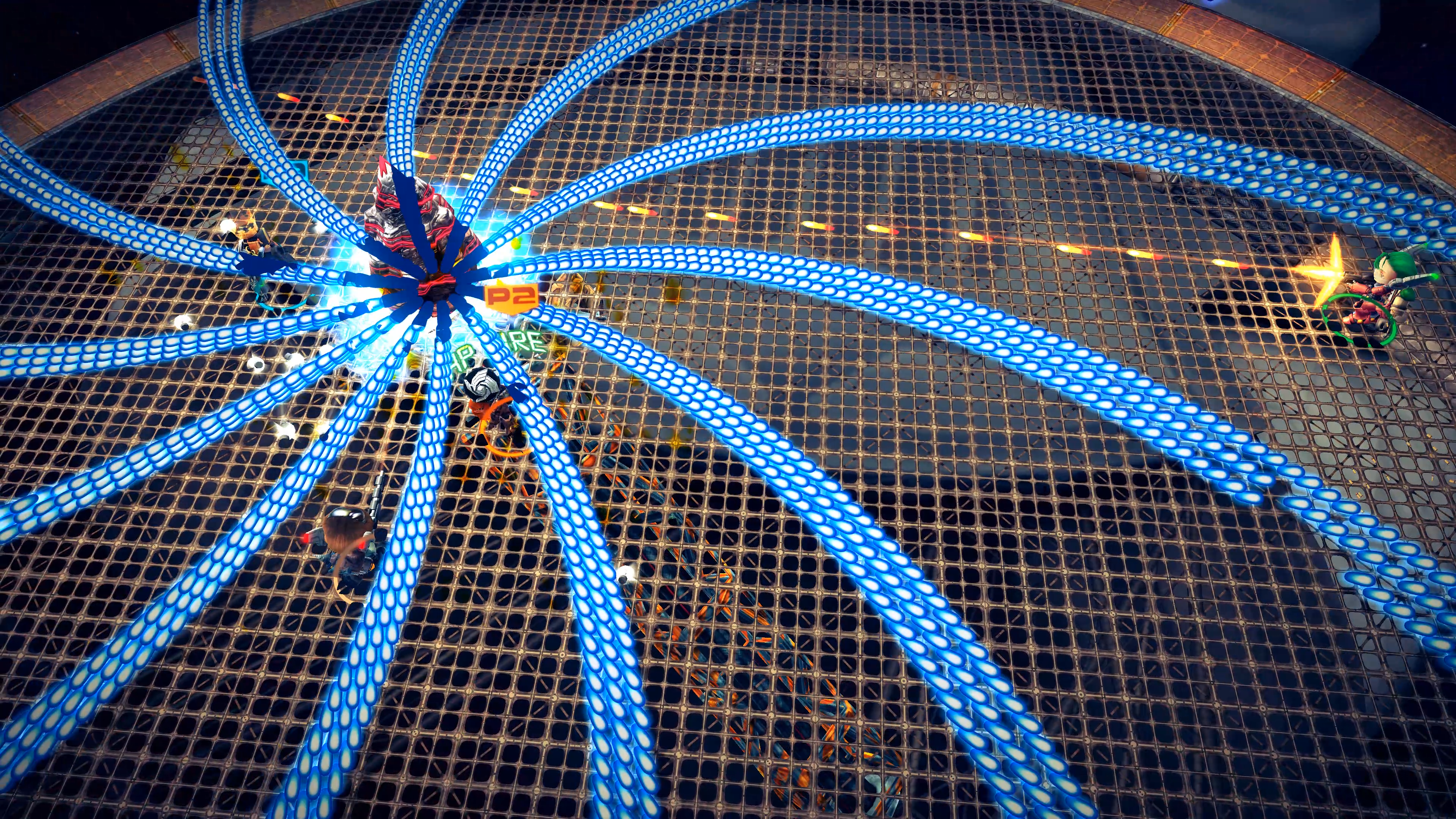 The graphic styling is slightly more cartoony than some of the other titles advertising "Xbox One X Enhanced", but that doesn't take away from the effect. The HDR support is absolutely fantastic; the levels, while some very steampunk, are extremely colorful and vivid. There's a constant barrage of on screen action, and the computing power of the Xbox One X churns right through. There is no better way to play Assault Android Cactus than on the Xbox One X.

Assault Android Cactus is sprinkled with a charm that is seldom seen in games anymore. It's a perfectly executed indie that feels like a AAA title (some pun intended). If you're still holding onto some gift cards you received for Christmas, or if you're the type who enjoys quick, fun gameplay that oozes with replay-ability, you should absolutely check out Assault Android Cactus.

NOTE: There is also a free trial available. Give it a download and then let it hook you.

For a quick look at gameplay, check out our Ultimate Home Entertainment/Gaming Setup: