We have seen a variety of controller configurations for the Nintendo Switch, all with varying degree of weirdness. Today, Nintendo gave us a name and details for it's small, configurable attachment controller for the Switch: the Joy-Con controllers. It turns out these tiny controllers are far more powerful and innovative than we may have been anticipating.

There is a left and a right Joy-Con, each providing an analog stick. The layout mocks an Xbox controller once docked, albeit with a 6" screen in the middle. In the initial video Nintendo released several months back, there was no indication whether or not the Joy-Con controllers had motion controls. Today, Nintendo confirmed that each Joy-Con is individually motion enabled, giving you free movement between hands, unlike the Wiimote and Nunchuck setup. This reminds me a bit of the Oculus Touch controllers.

I can't say for sure, but on paper it seems like the Joy-Con may be more of a 1:1 experience than what we've seen in other two handed motion controls. The new HD Rumble pack in the Joy-Con is (supposedly) so precise you can sense how many ice cubes are in a glass and when water is being poured into it. The Joy-Con controller also has an IR sensor on the front, or top depending on how you're holding it. This sensor can track objects, gestures, and distances. For example, it can recognize and distinguish the different gestures for Rock, Paper, Scissors, or it can tell when you've covered the sensor for a quick draw game, like the announced 1, 2, Switch. The amount of sensors and ways to use this controller is impressive, but I am concerned developers will feel overwhelmed by the possibilities. Hopefully they see it as an opportunity to introduce new play styles that fit their game, rather than supporting all configurations.

Nintendo also announced that Neon Blue and Neon Red color variations of the Joy-Con would be available at launch. 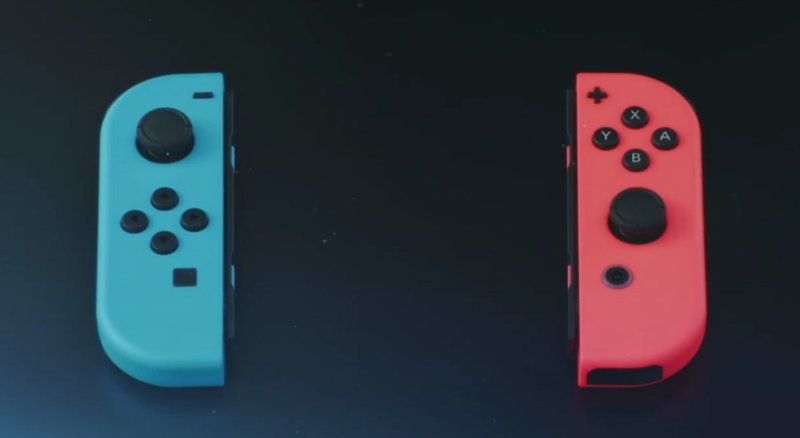