Each year, the technology we interact with every day gets more advanced, and it enables us to achieve more. We may be living in the age of the phablet, but we can continually fit more and more into our pockets because of innovations in technology. My father used to work in the service department for one of the largest electronics companies in North America. I can remember, years ago, walking through their showroom and seeing one of the first home projector units. It was the size of a coffee table, and came bundled with an audio receiver because it was so loud you needed the extra amps just to hear your content. The price tag was astronomical, similar to how expensive curved TV's were just a few years ago. On the bright side, you could use the heat from the lamp to warm your home, so maybe that price tag would even out in your heating bill, especially with the winters (and sometimes springs, summers, and falls) here in Cleveland.

The Blitzwolf BW-MP1 WiFi Ready Mini Projector is a perfect example of these advancements in technology. The projector measures in at about 8"x6"x3" and outputs 1,200 Lumens at a resolution of 480p, which rivals that coffee table sized projector from the early 2000's. A quick specification rundown of this projector looks pretty impressive on paper:

Oh, and it sports a very reasonable price tag of $99. But, how does it stack up when put to the test?

Let me start by saying that I didn't test the Blitzwolf BW-MP1 projector as my primary media consumption screen. I think we can all agree that given the spec sheet, that is not it's intention. Instead, I tested it as a secondary screen. I don't have a TV in my office, but I often use the iPad Pro to play Netflix or YouTube in the background as I work.

The feature I was most excited about with this projector was the prospect of using Apple AirPlay to cast my content to it. I'm a huge fan of wireless configurations, getting my moneys worth out of my Chromecast and AppleTV. Needless to say, this was the first thing I tried. I've had this projector for several weeks now, and the "WiFi Ready" feature is one I'm still trying to get to work. Using my iPhone I was able to successfully mirror my screen, but whenever I open a video, the connection seems to drop. On Android, I can't even seem to find the projector in the wireless display list.

To get around the connection issues I was having with BW-Link, I proceeded to connect directly via HDMI. With the direct connection, I watched some YouTube videos, streamed the Indians game, and the video quality checks out surprisingly well. Even though the max resolution of the BW-MP1 is 480p, at a screen size between 50"-70", it looks really good...for the most part. 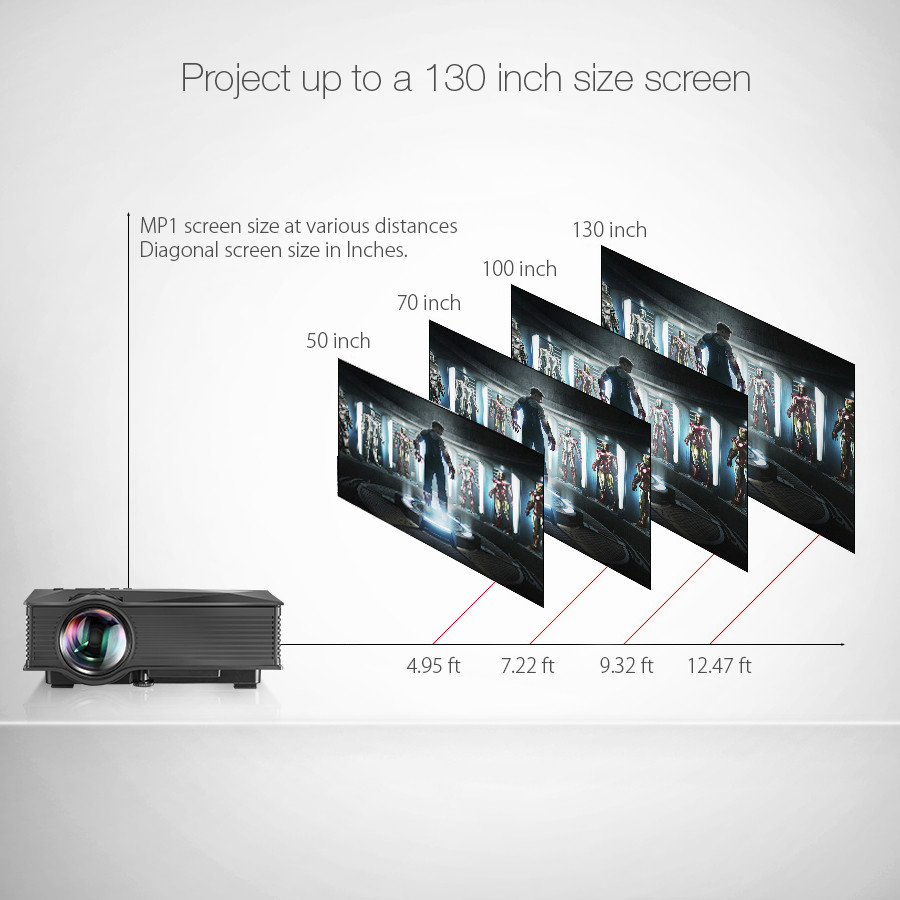 Blitzwolf recommends viewing distances of 4.95 ft (50" screen), 7.22 ft (70" screen), 9.32 ft (100" screen), or 12.47 ft (130" screen). At all sizes, the edges of the screen lacked the sharpness of the center of the screen. One nice feature of the BW-MP1 is the Keystone Correction, allowing you to adjust the trapezoid distortion from the angle the projector sits on the table. Unfortunately, I was only able to ever get either the top or the bottom of the screen fully in focus. It seemed that the adjustment knob was unbalanced and usually left the bottom third of my screen slightly fuzzy. But only for video. Viewing spreadsheets, and slideshow presentations, the entirety of the screen was pretty clear. I actually opted to use the BW-MP1 during a meeting because of it's form factor and convenience. I did find it interesting, though, that in the Product Description on the Amazon listing for the BW-MP1 that Blitzwolf sates, "This projector is designed for home theater movies and video games, not recommended for EXCEL or business presentations". I imagine that Blitzwolf wants to stress that this projector is good enough to be the center piece for your home theater, but I absolutely recommend this projector for business.

All projectors I've ever used have a fairly significant hum to them. The BW-MP1 is no exception. The built-in speakers do a fairly good job of projecting over the hum, though they sound a bit like a tin can. I put on some headphones to see what the audio output was really like, and was very surprised. The audio isn't mind blowing, but it is pretty good.

One thing to continually remind yourself about this projector is that it retails for $99. The video quality is solid, albeit partially out of focus. The audio quality is solid, assuming you're using headphones. The expected lamp life is solid...for a projector that is $99. I could easily see myself setting up this projector on an empty wall, connected to my Xbox or PlayStation, and using headphones to game.

At $99, I wasn't expecting game changing quality. The Blitzwolf BW-MP1 is just about as I expected it would be. It is a very solid mini projector that can give you a large screen for a small price. If you think you'd like to try one out for yourself, you can pick one up from either of the links below: